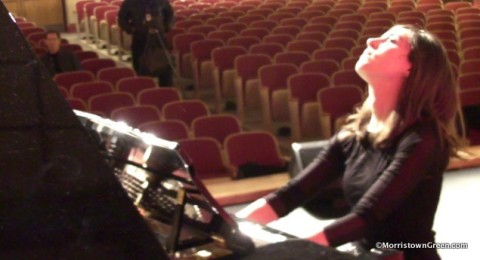 Some things are poorly named,  but Morristown’s Got Talent isn’t one of them.

The finalists gave a pretty fair preview over the weekend for Media Day, polishing their acts at Morristown High School for the main event on Feb. 25, 2015, at the Mayo Performing Arts Center.

Last year’s show raised more than $70,000 for the Morris Educational Foundation. This year’s eighth annual edition will feature new prize categories — age 18 and under and age 19 and over, to be selected by celebrity judges, and a winner to be chosen by audience text messages at the show.

As a bonus, Tara Bernie of Access Hollywood is back for her second year as emcee.

Winners will share $2,500 in prize money. The contest is open to anyone who lives, works or studies in Morristown, Morris Township or Morris Plains, and to graduates of Morristown High School. More than 70 acts auditioned in December.

One of this year’s 16 finalists:

First-time contestant Anastasia has been playing piano since she was seven years old, and now teaches piano in Morristown.

The native of Russia decided to audition to inspire her students. Prohorova has performed in New York and is planning her own recital there in the near future.

While she hopes to win, her real goal is to motivate her students and share her love for music. Prohorova will play a piece by Chopin.

“I think it’s just so beautiful and irresistible,” she said. “It’s something I wanted to learn and I really love it.”